Jack Eichel's goal fewer than three minutes after faceoff Monday night sparked a five-goal first period for the host Buffalo Sabres, who continued their dominance of the New Jersey Devils with a 7-1 rout.

Conor Sheary scored twice in the first for the Sabres, who led 5-0 after one and 6-0 fewer than five minutes into the second. Jeff Skinner and Rasmus Asplund added first-period goals before Victor Olofsson and Henri Jokiharju scored in the second.

The Sabres have beaten the Devils twice this season by a combined score of 14-3. Buffalo's five-goal first period was its biggest outburst since it scored five against New Jersey in the second period of a 5-1 win on Jan. 8 of last season.

Nico Hischier scored the lone goal for the Devils, who lost to the New York Rangers 4-0 Saturday and have given up 11 goals or more over a two-game span five times this season. Goalie Louis Domingue was pulled after stopping just 10 of 15 shots in the first period. Mackenzie Blackwood made 15 saves the rest of the way.

Eichel opened the scoring at 2:46, when Domingue slowed Eichel's shot from point-blank range but could not stop the puck from trickling through. Skinner doubled the lead at the 4:59 mark when he picked up a loose puck in the Devils' zone and beat Domingue on the breakaway.

Sheary extended the Sabres' lead to 4-0 by scoring back-to-back goals in a span of just under 10 minutes. The left winger put back the rebound of a Skinner backhand at 6:57 before his shot from the faceoff circle clipped off the glove of Domingue and bounced into the net with 3:19 left.

Asplund made it 5-0 with a slapshot that sailed over Domingue's glove with 58 seconds left in the period. Domingue snapped his stick over his knees as he skated off the ice following the buzzer.

Olofsson gave the Sabres a 6-0 lead by scoring 4:40 into the second. Hischier got the Devils on the board with a power-play goal at the 8:10 mark before Jokiharju scored on the power play just under four minutes later.

Amid a dismal season, the only sustained success the Buffalo Sabres have enjoyed has come against the New Jersey Devils.

Looking to extend their points streak to a season-high six games, the host Sabres will try for a second victory in three days over the struggling Devils on Thursday night.

Since its shootout-era-record 18-game winless stretch (0-15-3), Buffalo is 3-0-1. The Sabres also have earned at least one point in five consecutive games. Down a goal late in the second period Tuesday against New Jersey, the Sabres scored three unanswered goals to pull out a 5-3 victory.

"Obviously, it's been documented pretty well we had a tough stretch there, but it's good to get rewarded," Sabres forward Casey Mittelstadt, who scored the go-ahead goal Tuesday and has three goals with two assists in the past four games, told the official website of the NHL. 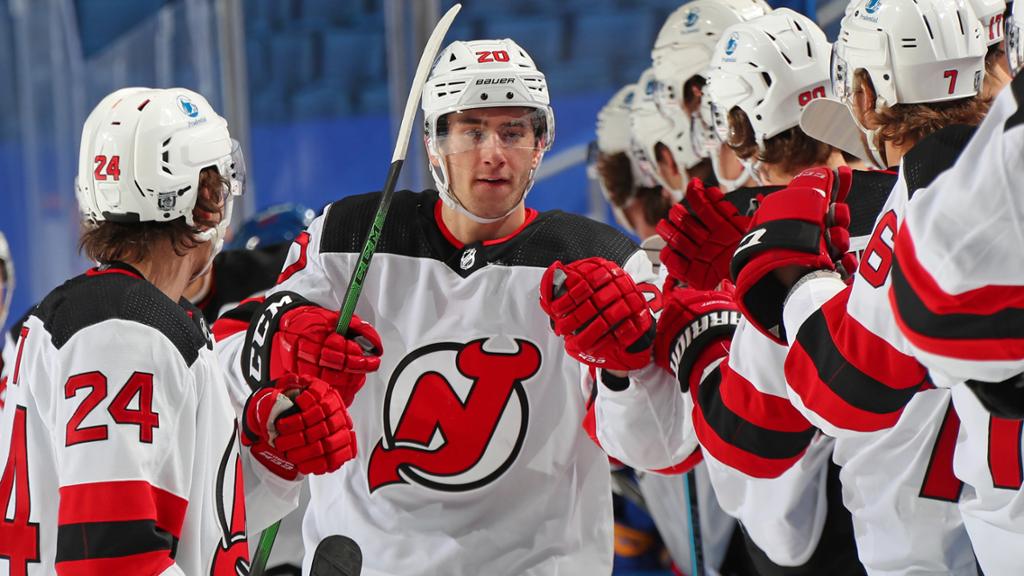 "It's good to have the guys have smiles on their faces. See guys having fun. We have to remember the feeling and keep going."

The Sabres have had plenty to smile about while posting a 4-2-1 mark vs. New Jersey this season. The Devils are the only East Division team against whom Buffalo has a winning record.

Mittelstadt has four points in his past three games against the Devils, while defenseman Rasmus Dahlin has two goals and five assists against vs. New Jersey this season.

New Jersey, which is in an 0-2-2 rut, has yielded five goals in three of its past four games.

Looking For The Best NHL Predictions? Here They are!

"We need to be better as a group," Devils forward Jesper Bratt, who has a goal in two straight games and 11 points in his past 12 contests, told NHL.com. "It's a hard division and you've got to compete. I think we have another gear, and we need to get it fixed up for the next game."

New Jersey goalie Scott Wedgewood allowed four goals for a second straight start Tuesday and has given up seven in two outings vs. Buffalo this season.

Devils forward and Buffalo native Miles Wood has four of his team-leading 11 goals against the Sabres this season.

To access the betting report for New Jersey Devils vs. Buffalo Sabres, please