LSU guard Trendon Watford converted a three-point play with eight seconds left, giving him 21 points for the game and leading the Tigers to a 79-77 win over Arkansas in Baton Rouge, La., on Wednesday night.

Arkansas guard Jimmy Whitt Jr. rattled home a 14-footer with 40.2 seconds left to put the Razorbacks ahead, 74-73. But Watford responded with a driving layup down the left side, drew a fifth foul on guard Mason Jones, and sunk the free throw to put LSU up a pair.

Arkansas guard Isaiah Joe hit a pair of foul shots, and the lead changed hands again. But Watford got the ball off an inbounds pass along the baseline, hit a short jumper while being fouled again and then sunk the charity toss.

That's about when the fouls started to pile up on Arkansas. Adrio Bailey joined Reggie Chaney with four fouls with 7:19 left.

LSU re-took a 73-72 lead when Mays grabbed an offensive board and laid it in with 2:30 left, setting the stage for the back-and-forth finish.

The teams traded buckets early, with neither team leading by more than four until almost 15 minutes in. LSU went ahead 24-23 on a Mays three-point play, but then went scoreless over the next 4:40, during which Arkansas had a 12-0 run.

But the Razorbacks didn't close the half well.

Chaney fouled Mays with 21 seconds left before the break, and, frustrated with the call, swatted the ball into the stands. That, and the ensuing technical, were his third and fourth fouls, and the Tigers hit three free throws to close within 40-37 at half.

Now they'll face each other in an SEC game Wednesday night in Baton Rouge, La. 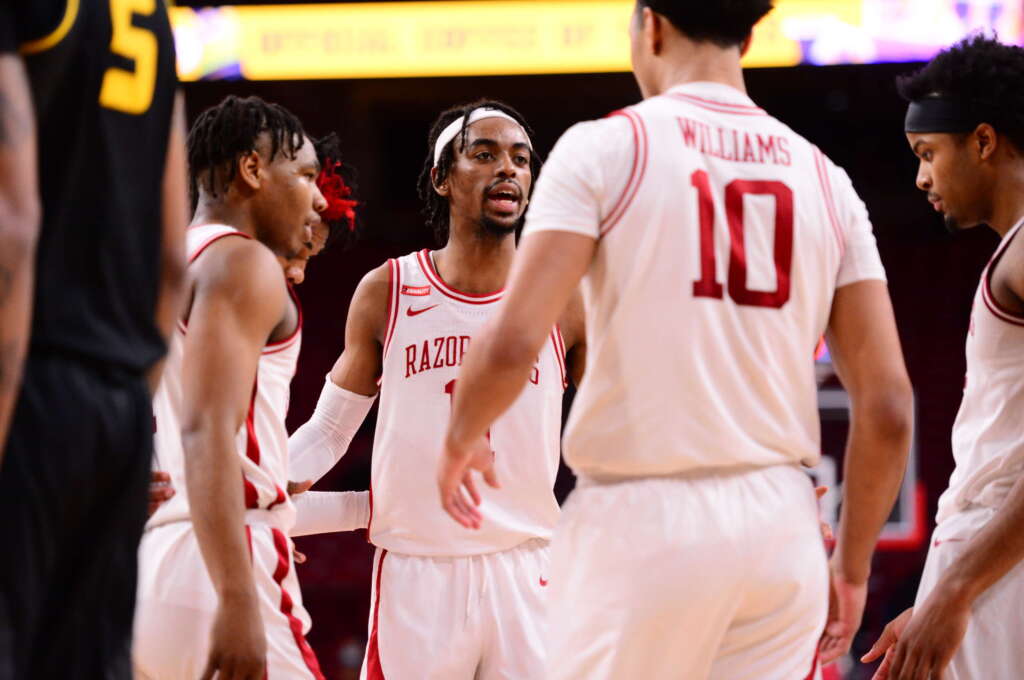 "I thought it was as good of a game as we've had conference-wise since I've been here," second-year coach Eric Musselman said.

Moses Moody scored a season-high 25 points for Arkansas, and Davonte Davis had season highs with 20 points, seven rebounds and six assists against Georgia.

Moody bounced back from a poor performance in a 79-74 loss to Tennessee last Wednesday. After scoring just six points on 1-of-8 shooting from the field, including 1-of-4 on 3-pointers, he made 9 of 15 field goals (2 of 6 on 3-pointers) against Georgia.

"Moses is one of our top scorers, so we're not worried about Moses at all," Davis said. "He had a rough game and came back, and you see what he actually can do."

LSU never trailed against Ole Miss even though leading scorer Cameron Thomas played just four minutes after suffering an ankle injury. Coach Will Wade said he didn't think the injury was serious and Thomas is questionable for Wednesday's game.

The Tigers jumped to an 11-2 lead, were up 39-21 at halftime, and were never seriously threatened in the second half.

"We looked like a real team, a championship-level team," Wade said. "This is the team we can be. We played like how we need to play. Our focus was through the roof. We were ready to go, and I'm very, very pleased with our guys."

Trendon Watford had 21 points and Javonte Smart 17 to lead LSU, but the defense set the tone. The Tigers forced 20 turnovers and outscored the Rebels 29-14 in points off of turnovers.

Would You Like to Bet on NCAAB? Take a Look At Our Sportsbook Review!

"We were all over the place and we closed out properly," Wade said. "We took proper angles, we made them play with their weak hand. We did what we were supposed to do, and we were locked in. We were ready to go."

To access the betting report for Arkansas Razorbacks vs. Louisiana State Tigers, please