The teams combined to make only 1 of 10 shots in the extra period. Rex Pflueger missed a potential game-winning 3-pointer with six seconds left for the Fighting Irish, who had a four-game winning streak snapped.

Virginia sent the game to overtime at 47-47 on Diakite's jumper in the paint with 25 seconds to play -- the Cavaliers' first points in more than six minutes.

Mooney had an opportunity to win it in the final seconds of regulation, but his layup attempt was blocked by Jay Huff.

Neither team could maintain momentum late in the second half. The Cavaliers pulled ahead 43-38 with a 10-0 run, including eight straight points (and two 3-pointers) by Huff, but the Irish answered with a 7-0 surge and took a 47-45 lead on T.J. Gibbs' 3-pointer with 2:40 to play.

Neither side led by more than three points for the entire first half until Gibbs sank a 3-pointer in the closing seconds to give Notre Dame a 26-22 halftime lead.

The Irish actually shot better from 3-point range (5 of 12) then they did from inside the arc (4 of 15) in the opening half. Mooney had five points and five rebounds but was only 1 of 6 from the field.

Diakite topped all scorers with nine points for the Cavaliers, who missed seven of their eight 3-point shots in the first half.

Notre Dame brings a 26-game losing streak against Top 25 opponents into an Atlantic Coast Conference clash with No. 18 Virginia on Wednesday in Charlottesville, Va. 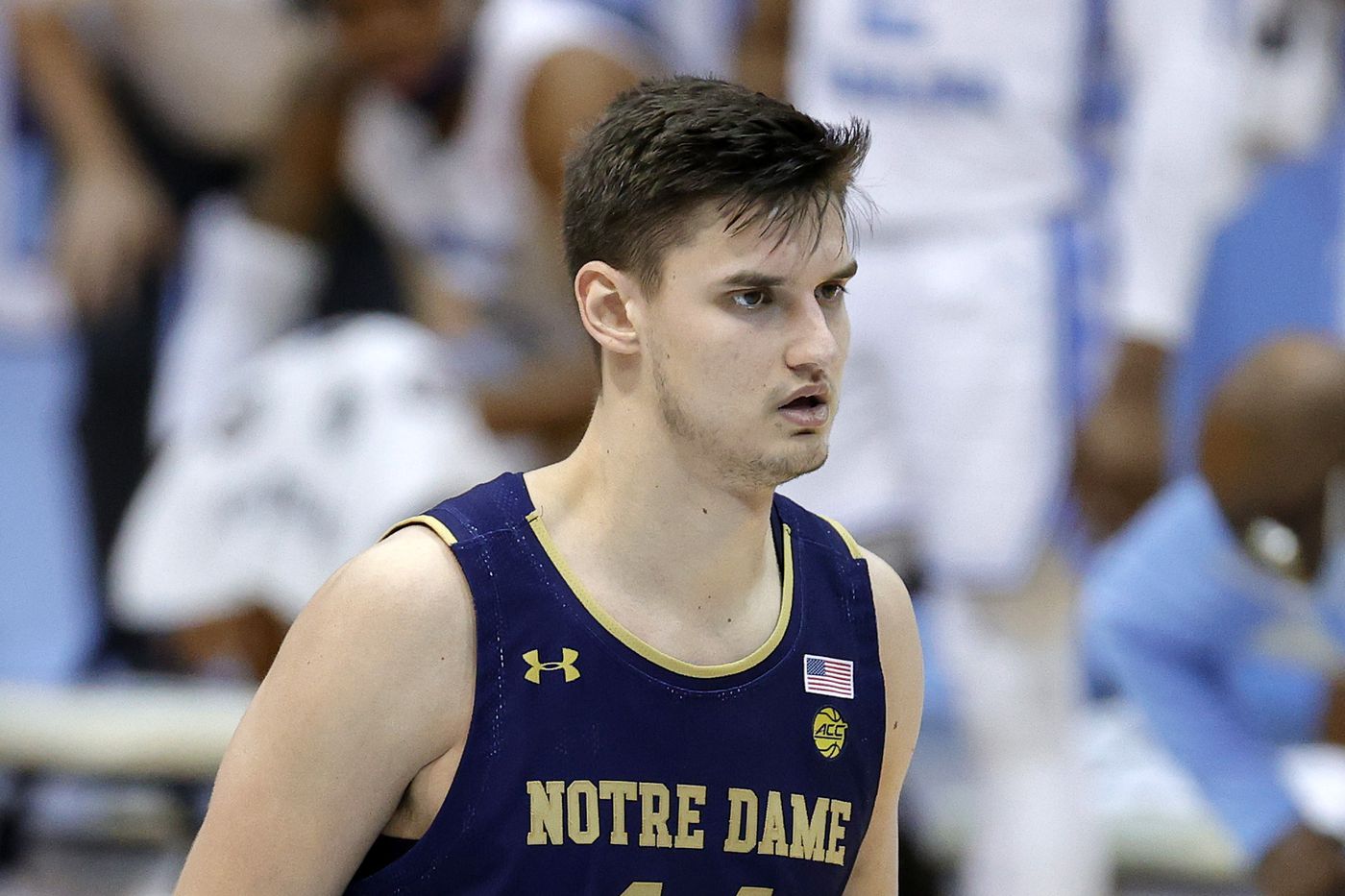 Meanwhile, the Cavaliers (7-2, 3-0) are 4-0 at home this season and have won 11 consecutive ACC games stretching back to last February. Virginia is also 15-2 all-time against Notre Dame, including 10-0 in ACC regular-season play.

Kihei Clark led Virginia with 19 points, Jay Huff added 15 and Sam Hauser, who enters Wednesday's contest with three straight double-doubles, delivered 13 points and 10 rebounds. The Cavaliers set a season low with five turnovers against the Irish after committing a season-high 15 in their previous game, a 23-point loss to No. 1 Gonzaga.

"Durham and Laszewski hurt us," Virginia coach Tony Bennett said. "We've got to kind of shore up guarding some of these (big men) and do the job."

Bennett's big men shouldered the load Saturday in a 61-49 victory at Boston College. Led by the 7-foot-1 Huff (18 points, eight rebounds, five blocks) and the 6-8 Hauser (17 points, 10 rebounds), Virginia outscored the Eagles by a decisive 32-16 margin in the paint.

"After the Gonzaga loss, I think we all realized that ... we had a lot of work to do, but that was (also) a game where we just didn't play the way we know we can," Huff said after the Boston College game. "We can remember it and then brush it off and move forward. It's almost a game that you just erase, in some ways."

Notre Dame will try to erase the frustration of its Sunday loss in Blacksburg, Va. The Irish led the Hokies by seven at halftime but were outscored 42-21 after the break. They made their last field goal with 12:16 remaining.

Looking For the Safest Betting Sites Online? Look No More!

"You're not going to beat a good team playing 20 or 25 minutes, and that's kind of what we've done against really good teams -- and (the Hokies are) really good," Notre Dame coach Mike Brey said. "We're learning, trying to learn the hard way to put 40 minutes together."