Yanni Gourde and Barclay Goodrow each had a goal and an assist as the Tampa Bay Lightning earned a 2-1 victory in Game 4 on Monday in their first-round playoff series against the Columbus Blue Jackets at Toronto.

The victory gives the Lightning a 3-1 lead in the Eastern Conference series. Tampa Bay can clinch the series with a victory in Game 5 on Wednesday.

All of the Lightning's offense came in the first five minutes of the second period. Tampa Bay's third line of Goodrow, Gourde, and Blake Coleman emerged from the first intermission with a dominant string of shifts that resulted in two goals.

Just 16 seconds into the second frame, Coleman sent a well-placed pass from the side of the net across to Goodrow for the game's opening goal. It was Goodrow's first goal of the playoffs, snapping a personal 19-game points drought in postseason play.

Gourde extended the lead at the 4:09 mark, tipping in a booming Kevin Shattenkirk shot from beyond the circle.

The Blue Jackets responded to Gourde's score by recording the game's next eight shots on goal. The flurry included a goal from Atkinson, who was back in the Columbus lineup after missing Games 2 and 3 with an undisclosed injury.

After being outshot 159-102 over the first three games of the series, Columbus outshot the Lightning by a 29-22 margin in Game 4.

But the Blue Jackets' offensive breakout ran into another strong effort from Andrei Vasilevskiy. The Lightning goaltender stopped 28 of 29 shots to improve to 5-2-0 with a .932 save percentage since the NHL restart.

Columbus goalie Joonas Korpisalo saved 20 of 22 shots in the losing effort. Korpisalo's game was highlighted by a pair of rapid-fire saves on Pat Maroon and Tyler Johnson during a second-period Lightning power play.

A would-be goal from Oliver Bjorkstrand at 1:52 of the first period was disallowed. A video review revealed a Columbus player was offside in the lead-up to Bjorkstrand's score.

Seeking a boost to perhaps get their season turned around Tuesday, the Columbus Blue Jackets found it in fourth-liner Zac Dalpe.

The center scored for the first time in 4 1/2 years, Joonas Korpisalo turned aside 36 shots, and the Blue Jackets improved to 3-1-1 against the Tampa Bay Lightning with a 4-2 win to open their four-game homestand.

On Thursday night, the Central Division teams will meet in Columbus for the final time this season. The foes have two more games scheduled in Tampa.

Without a goal since Oct. 20, 2016, Dalpe shoveled in a sharp pass from Max Domi to put Columbus on the board. Defenseman Seth Jones started the play deep in the defensive zone with a long pass to Domi, located near the Lightning bench.

"I knew there were a lot of days between my last goal and now," said Dalpe, who tallied for the first time in 1,629 days. "Definitely joy and some relief. I still want to prove to people and myself that I can play at this level. Getting the goal is a cherry on top."

The former Ohio State Buckeye was asked if he and his teammates turned up their game against the defending Stanley Cup champions. 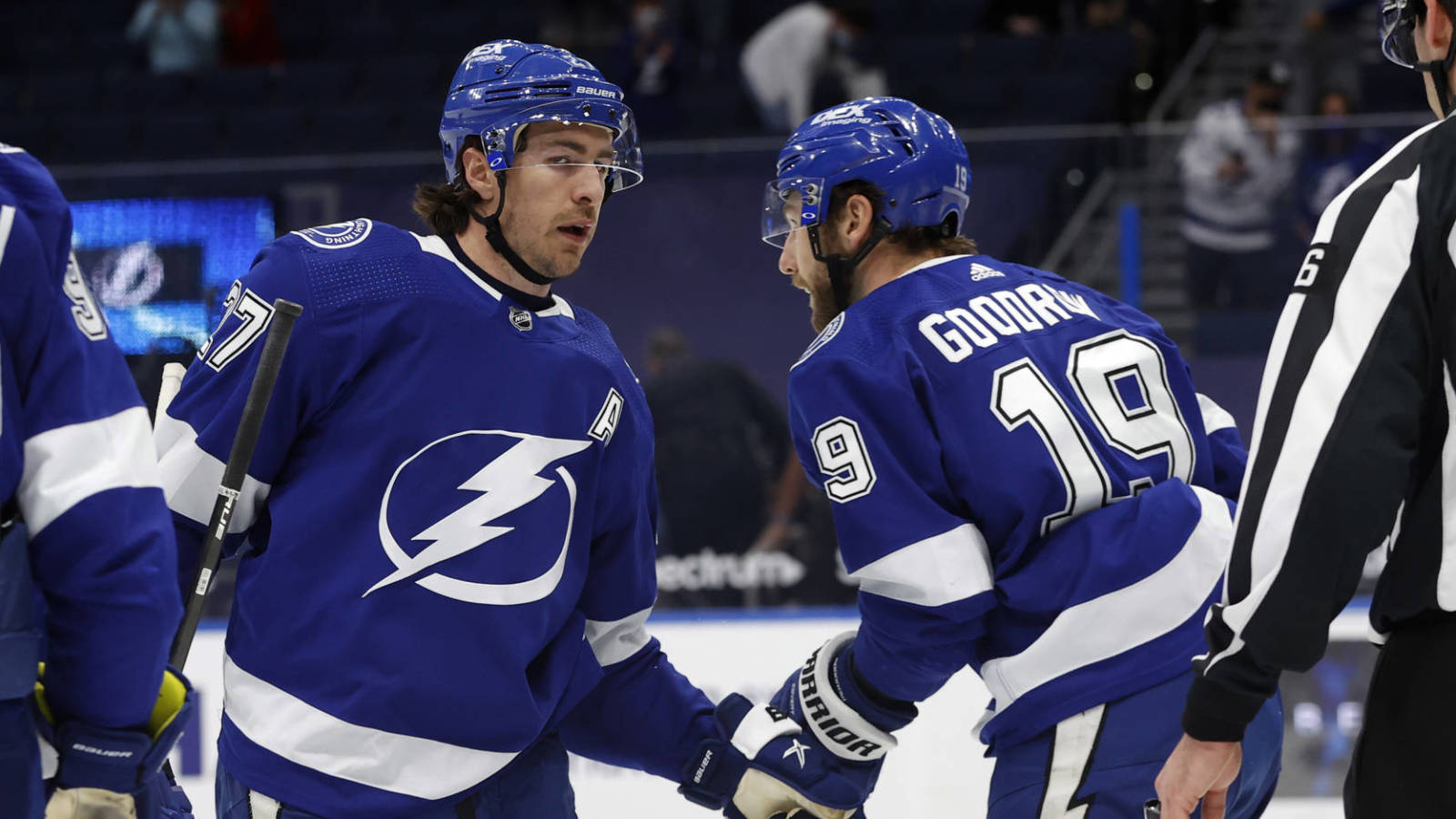 "Maybe," Dalpe said. "I think at this point in the year we're just out to prove that we can be a better hockey team and be more consistent. Obviously, it's no secret about the Lightning and how good and skilled they are, so maybe that adds a little pep in your step, so to speak."

Korpisalo blanked the them deep into the third period before Ross Colton and Luke Schenn scored goals.

"Korpy was outstanding, giving us a chance," Columbus coach John Tortorella said. "Dalps is another guy that's easy to pull for - taxi squad, not on the taxi squad, all that. It's been a long year for him."

Gritty left winger Boone Jenner - one of Tortorella's heart-and-soul guys - left after being struck in the wrist by a shot from teammate Patrik Laine in the third period.

"The situation that we're in here, that's the guy you want leading the charge," Tortorella said. "I'm not so sure we're going to get good news there."

Meanwhile, the Lightning have suffered a power-play outage -- surprising given the elite talent of Victor Hedman, Steven Stamkos and Brayden Point anchoring the top unit.

They went 0-for-4 in the loss, extending their man-advantage futility to 1-for-18 in the past seven contests.

Lately, the team has struggled to score at all, going seven periods during one stretch and finding the net just once.

"I think when the scoring dries up, you're looking for answers," Lightning coach Jon Cooper said. "The big thing is, when that is happening you can't change your game. That's a hard part for any athlete.

"We had a breakaway, we had a two-on-one, we had some good chances. Then all of a sudden we have one breakdown (on Dalpe's goal) and it ends up in the net. Now you're chasing it."

Holding third in the division, the Lightning are only two points behind first-place Florida but are 2-5-0 in their past seven matches.

Added Stamkos, goal-less in seven straight: "It just feels like no matter what we're doing, we're just not getting that reward or that bounce."