Corey Crawford made 32 saves for his first shutout of the season as the Chicago Blackhawks defeated visiting Dallas 3-0 Tuesday night, preventing the Stars from breaking two franchise records.

The shutout was the 26th of Crawford's 13-year career with the Blackhawks. His season career high is seven, set in 2015-16.

Saad scored at 11:20 of the first period following a faceoff win by Alex Nylander in the Dallas end of the rink. The puck went back to Erik Gustafsson at the right point. The defenseman skated toward the top of the faceoff circle and faked a shot, drawing two Stars forwards out of position, before chipping a pass to Saad, who had skated into the top of the slot. Saad's one-timer skipped under the pad of Dallas goaltender Anton Khudobin and just inside the right post.

Kane made it 2-0 with a power-play goal at 10:42 of the third on a snap shot from the right faceoff circle, assisted by Alex DeBrincat and Andrew Shaw. The Stars had killed 15 consecutive penalties over a four-game stretch before Kane's tally.

Kane extended his point streak to 13 games, during which he's had 22 points (nine goals, 13 assists), and helped the Blackhawks snap a three-game winless streak (0-2-1).

Khudobin, who made a season-high 38 saves Saturday as the Stars defeated the visiting Blackhawks 2-1 in a shootout, stopped 35 of 37 shots in Tuesday's rematch.

While it was a home-and-home series for the Blackhawks, the Stars were playing the second half of a back-to-back. Dallas defeated visiting Las Vegas 4-2 Monday to tie the two franchise records.

The loss was the Stars' first in regulation since a 3-0 setback to Pittsburgh on Oct. 26.

The Dallas Stars keep looking for ways to build momentum, but every time they take a step forward, they seem to take one or two steps back.

The Stars again will try to turn things around when they visit the Chicago Blackhawks on Thursday night.

Chicago won the opener of the two-game set 4-2 on Tuesday, dropping the Stars seven points back of the final playoff spot in the Central Division with 19 games left. The Blackhawks are two points behind the fourth-place Nashville Predators with 16 games remaining for each team.

Dallas hasn't won two in a row against the same team since it earned back-to-back wins over the visiting Detroit Red Wings on Jan. 26-28.

"It's pretty simple from my standpoint: You're not getting in the playoffs with 36 points," Stars assistant coach John Stevens said. "We can sit here and hope that teams lose, but until we start helping ourselves, we're not going to get where we want to be. The other teams can do what they want; we have to take care of our own business." 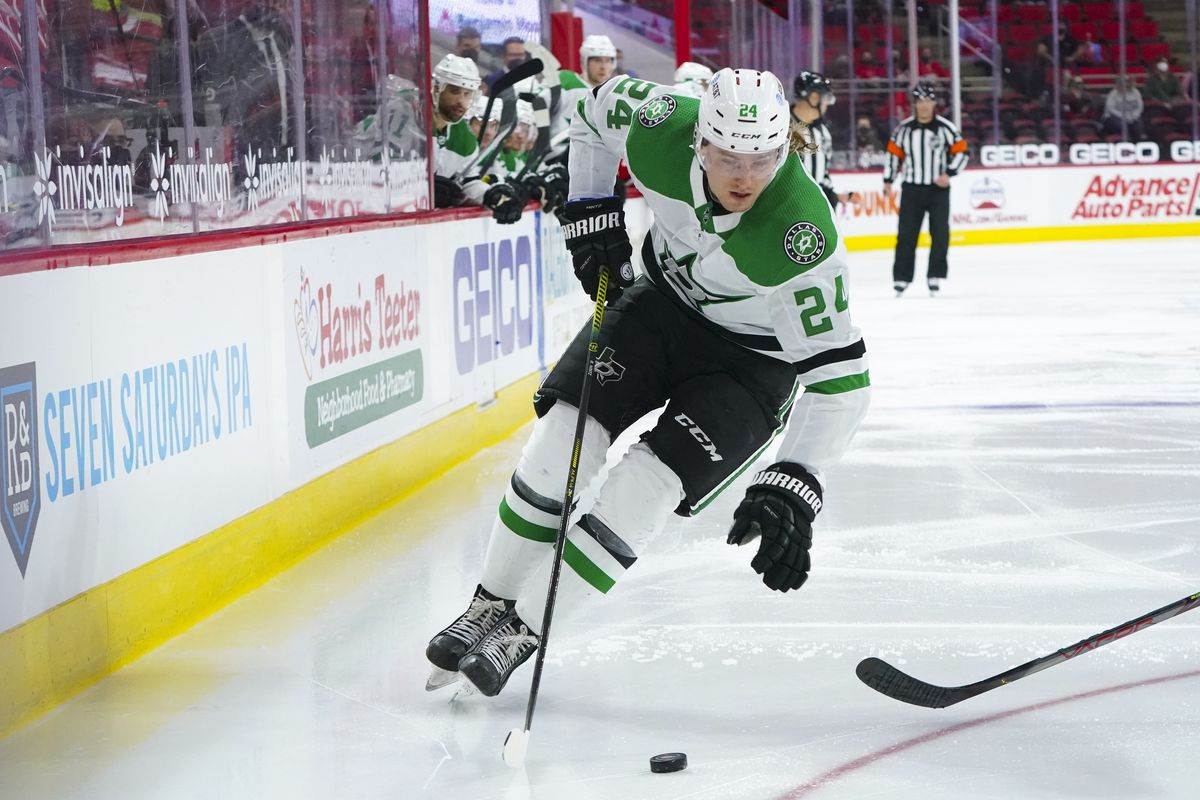 Stevens reportedly will turn the team back over to head coach Rick Bowness, who was pulled mid-game on Sunday at the Carolina Hurricanes, and then missed Tuesday's game while quarantining in COVID protocol because of a false positive test.

The Blackhawks hope to establish some consistency as well.

Chicago took over fourth place in the Central Division with back-to-back wins against the first-place Florida Panthers on March 23-25, only to lose its next two games against the Predators to fall back to fifth, where the Blackhawks still sit.

The win against the Stars on Tuesday was a big confidence boost for the Blackhawks, however. They took a 3-0 lead into the third period, only to see Dallas cut it to 3-2 with 6:14 remaining. Patrick Kane iced the win with an empty-net goal with seven seconds left.

"It was important for our group and their confidence that we were able to lock it down," Chicago coach Jeremy Colliton said. "I like that we stuck with it and had some good, strong shifts to close out the game."

The Blackhawks received some noteworthy contributions in the win.

Kirby Dach gave Chicago a 1-0 lead with his first goal of the season in his sixth game with Chicago. The third pick of the 2019 NHL Draft missed the first 34 games after undergoing wrist surgery in the offseason.

Vinnie Hinostroza assisted on the second goal in his first game since he was re-acquired by Chicago in a trade with the Panthers.

"It's so tight in our division here," Hinostroza said. "I was just working hard every day for an opportunity. Luckily, it's here in my hometown with a lot of the guys that I know and want to battle for to get in the playoffs. Us getting in the playoffs would be the most rewarding thing. I think we could do some damage if we get there."

To access the betting report for Dallas Stars vs. Chicago Blackhawks, please